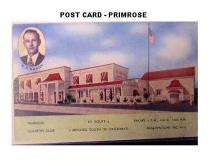 Which is stranger? Past? Present?

During Prohibition the famous Primrose Club in Newport, once frequented by celebrities, featured the best of entertainment during the wild days when gambling and prostitution ruled in Newport.

The building is said to be haunted and is frequently the subject of paranormal investigation and speculation stemming from the building’s wicked past.

Once the scene of a slaughterhouse for animals and possibly humans, it has a terrifying history.

Pregnant Pearl Bryan and her beau Alonzo Walling attempted abortion unsuccessfully in 1896. When she died he surgically removed her head to hide her identity then ditched her body on the property. Alonzo was convicted and hanged but promised to haunt the place.

In the 1950’s it was the famous Latin Quarter. The owner was criminally connected. When his daughter Johanna discovered he’d put out a hit on her lover, singer Robert Randall, she poisoned her father then killed herself in the building’s basement. Some say they still smell her perfume. (Note: Bobby Mackey’s full name is Robert Randall Mackey.)